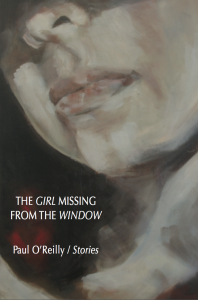 From Austen to Tolstoy to Maeve Binchy’s novels there is endless mileage for drama in the everyday world. Paul O’Reilly’s debut collection, The Girl Missing from the Window, grounds itself in this domestic space. His flair for drama is evident throughout the collection, with storylines full of intrigue, sex and death. In this collection O’Reilly embraces the sensational in domestic life. These are the kinds of stories that make for great gossip in small towns – the you-wouldn’t-believe-what-happened-to-so-and-so that is the bedrock of Irish storytelling. Maeve Binchy would be off the bus, following any of these characters home.

These stories show a fine aesthetic steadiness, and O’Reilly successfully meditates on suicide, sexuality, emigration and death without us ever feeling like he’s checking off a list of ‘Irish literary themes.’ The prose is predominantly subtle, quiet. At its best, this results in lingering, arresting images of emotional corruption in which lives change forever (‘What Rose Did’; ‘Tinkers’), while elsewhere this can indicate a certain lifelessness in depicting complex psychological experiences (‘Alzheimer’s’).

Depression is almost impossible for the sufferer to observe within him or herself and none too easy for outsiders to spot either. Melancholy though is an outcome, a mood that can be entered into; it can be objectively felt. Paul O’Reilly’s characters are aware of the moods they enter into and the reasons for them. The young man in I Wish MacGowan Hadn’t Written That Song is so aware that as he has a last dance with his mother in their kitchen the night before he leaves his Irish home permanently for New York, that The Pogues’ Fairy Tale of New York couldn’t possibly be a more ironic piece to be playing if it marched in carrying a sign. Or there is the family in the opening story, a brilliant build of family tension called What Rose Did about teen suicide and bullying. In a brilliant decision which I applaud, O’Reilly stops that story at exactly the right point, as a few seconds later there will be a burst of realisation that will destroy every relationship within that family; melancholy then to spread like an oil slick across what once was a pleasant beach.

Stories carved from the underbelly of our society … an outstanding read. At times achingly beautiful, at times thought provoking in its bluntness, O’Reilly has delivered nine stories that tap into many of the modern day issues that hang over Irish society. Immigration, loneliness, teenage suicide, sexual guilt and old age are all dealt with great authority and sensitivity.

Lean, and sometimes mean, these stories sift through the flotsam and jetsam of the everyday, negotiating the sometimes tricky currents that define what home or family is or what it might be. This collection, from a talented Wexford writer, has been long-listed for the 2015 Frank O’Connor International Short Story Award.

The subject matter is scaffolding for well-drawn characters, caught up in situations that reveal their inner cores; their sometimes fragile, and other times touching, relationships, and their engagement with a bewildering world. O’Reilly’s writing style is spare, with no artifice, just plenty of intimacy. A promising debut from a writer who is attuned to the tawdriness and the sadness that stalk his characters’ worlds.

This is dirty realism, 2015 style, and every permutation of horror is plausible in our country today. This striking debut is often topical, yet the collection transcends topicality with style and mastery, as it delves deep into human stories. These tales would make a great book club choice.

These stories are modern with big themes and familiar characters in challenging situations. Most importantly of all, they are told so well that one is simply compelled to keep turning the page.

Paul O’Reilly’s stories are lean, no wastage, no linguistic tricksiness. A young man dances with his mother as the Pogues play (and it has to be the Pogues) in a scene that is at once sweet and Freudian. A woman discovers her teenage daughter has become embroiled in a text bullying three-way, and the tale unfolds with the gut-churning speed of a suspense novel. A man has a last rendezvous with a roadside prostitute; another man prepares to watch his father die; yet another crawls through a sewer tunnel of grief to find redemption in the bosom of family.

There’s no escape from the prevailing sense of tension. The title story’s stooge goes to Amsterdam for a match and ends up the butt of a stag-like prank, but it’s all too sad to be ironic. The protagonist of What’s Eating Him? is a sort of Jim Thompson drifter who appears to dodge a bullet in the final act, but you can’t be sure: O’Reilly cuts away at just the right moment and leaves us to complete the mystery in our minds. That takes confidence.

The Girl Missing From the Window does not attempt to forge poetry out of the everyday. The author refuses to photoshop reality with fancy language. He pushes all the unsavoury aspects of existence under your nose: the comedy and horror of mothers with Alzheimer’s and fathers hooked up to morphine pumps and swingers’ weekends gone horribly wrong — or horribly right. This is the way things are, these stories seem to say, and there’s a trapdoor under every footfall.

Peter Murphy, author of John the Revelator
and Shall We Gather at the River

Whether in a delicate tale of a few pages, or in the longer, more layered and textured stories, in his first collection Paul O’Reilly proves himself both daring and skillful. The work is deeply imagined, and explores painful themes – some of which could be from today’s headlines, while others are from a hidden, darkly sexual place. Only time can tell, but it seems probable that a number of stories here will stand with the very best being written today. What is certain is that they are powerful works of imagination, and herald a fine writer.

Philip Casey, author of The Fabulists,
The Water Star and The Fisher Child

His stories are so relevant in their topicality, his language so powerful in its directness, and his feel for what we like to call humanity is so on the button.

O’Reilly writes beautifully and follows Flaubert’s great injunction that the writer should be everywhere present but nowhere visible. This collection is highly persuasive, engaging impressively with the complexities of family relationships.

Above images are for press use. Please click image to open and save/export, or right click to save the linked image file to your desktop. All author photographs © Helen Kirwan.

Appeared on the ‘So You Think You Want to Write?’ panel discussion at Carlow PenFest on Sept 13th, 2015, alongside John Walsh and Lisa Frank of Doire Press, and writer John McKenna. Facilitated by Carlow Library Service.

Emigration and Ireland: The Evolution of How We Say Goodbye – a brief article published June 28th, 2015 on TheJournal.ie.

Read at the Focal Literary Festival in Enniscorthy on June 26th, 2015. Also participated with Felicity Hayes McCoy and Andrew Hughes on the Non-Fiction Writing Panel (where Paul spoke about researching and structuring his documentary films) and moderated the Publishing Panel of Tracy Brennan (agent), Sue Conley (author, The Herald) and Gavin Hatch (Eason). Irish TV caught some of it on camera.

Addiction, Therapy and Fiction – a brief article on how writing has helped Paul through the darker days of life. Published June 25th, 2015 on Writing.ie.