A Night on the Hill

Paul O’Reilly is a gifted short story writer and that is hugely evident in the monologues and much of the real-time interaction between the characters. The central relationship between Bull and Rash plays very well and progresses nicely through the moments of comedy. I was particularly taken by their exchange about Vinegar Hill and the black cloud of death which hung over it in the aftermath of 1798 – like a local Killing Fields. Paddy’s entrance at the end of Act One and subsequent development in Act Two is, for me, the strongest aspect of the play and the moment when the conflict and the drama ratchet up. It’s an excellent performance of a character who, though painted as a villain, we find ourselves empathising with just as much as any of the other characters. Rash’s monologue with Paddy about how he came to be involved with the Volunteers is a beautiful piece of writing and acting and the show-down between Bull and Paddy is a prime example of good drama. ‘A Night on the Hill’ is no mean feat and EDG’s excellent production is tight, tense and entertaining.

Beautifully written, capturing all the nuances, dilemmas and inner traumas of the time, this piece of drama is written from everyone’s point of view or is, at least, sympathetic to all factions. As each of the characters’ stories expertly unfolds, we develop a tolerance for them that perhaps surprises us as Enniscorthians.

Although a work of fiction, it tells it very much the way it was. O’Reilly’s feeling for the period is obvious and his treatment of the characters is compassionate and understanding. The dialect, the wit are so Enniscorthy and when the characters talk of hearing Pearse speak, or about the British soldiers camped at the Showgrounds, it makes it all so close and real. This is a play that will stay with you long after the curtain comes down.

Beautifully written with cracking dialogue that will make you laugh out loud and bring you right back to 1916. The production from EDG was superb – set, costumes, lighting, video graphics, stage direction and incredible performances from the cast.

I found the dramatic nicety of Athena’s presence throughout ‘A Night on the Hill’ to be  truly poetic, a fine contrast to the (often hilarious) common man ordinariness of the inter-play between Bull and Rash – you or me with all our faults and frailties and stubborn eccentricities. The humour is infectious and, at times, quite touching and helps provide a different take on our romantic ideals and man’s fragile bravery. I admire so much Paul’s ear for dialogue and the quirky ways of human nature and thoroughly enjoyed the first-night production of his play. I left the theatre, mind churning with the rhythm of history and a greater understanding of our island’s bitter struggles and the constancy of that smile in the face of adversity – that rugged, unswerving belief in what is right for all of us. And yes, it was good old Enniscorthy to a T. 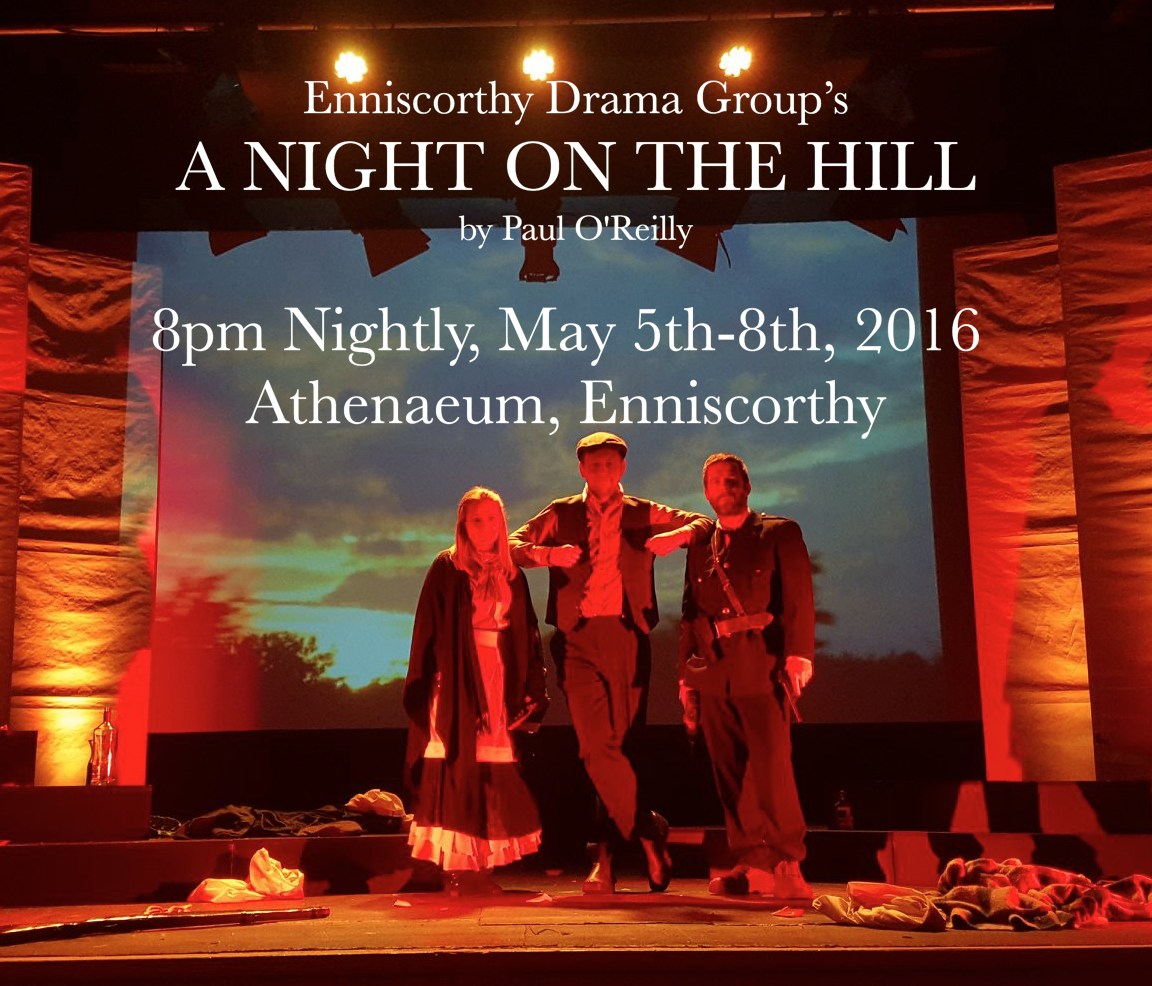 It is the eve of May 3rd, 1916. In Dublin, the executions of the Easter Rising leaders have begun. In Wexford, British soldiers with the help of others are rounding up rebels. On Vinegar Hill, first cousins Bull and Rash, two Enniscorthy Volunteers, await news from the town below, hopeful that the lifting of the rebels will soon cease.

They talk of their town, the Hill, Commandant P.H. Pearse’s visits, but when Bull’s trusted friend Birdie arrives with news of Pearse’s execution, and that one of the soldier’s hunting Bull is a man from Bull’s tragic past, Bull’s inner demons surge and his doubts around how much he’s willing to sacrifice intensify.

Later, even though visited by Cathleen Ní Houlihan in a dream, a mythical heroine who endeavours to refuel Bull’s dedication to her and to Ireland, it is only when Bull wakes and comes face to face with the soldier hunting him that he is forced to not only air some hard-truths about his family’s past, but also to finally decide on which future he desires most.

Though influenced by witness statements and archives of participants in the Wexford Rising, and by newspaper articles of the time, this is a play of fictitious characters and households that explores culture and comedy, war and consequence, religion, class and love, as well as the sacrifices both sought and offered by the people of 1916. 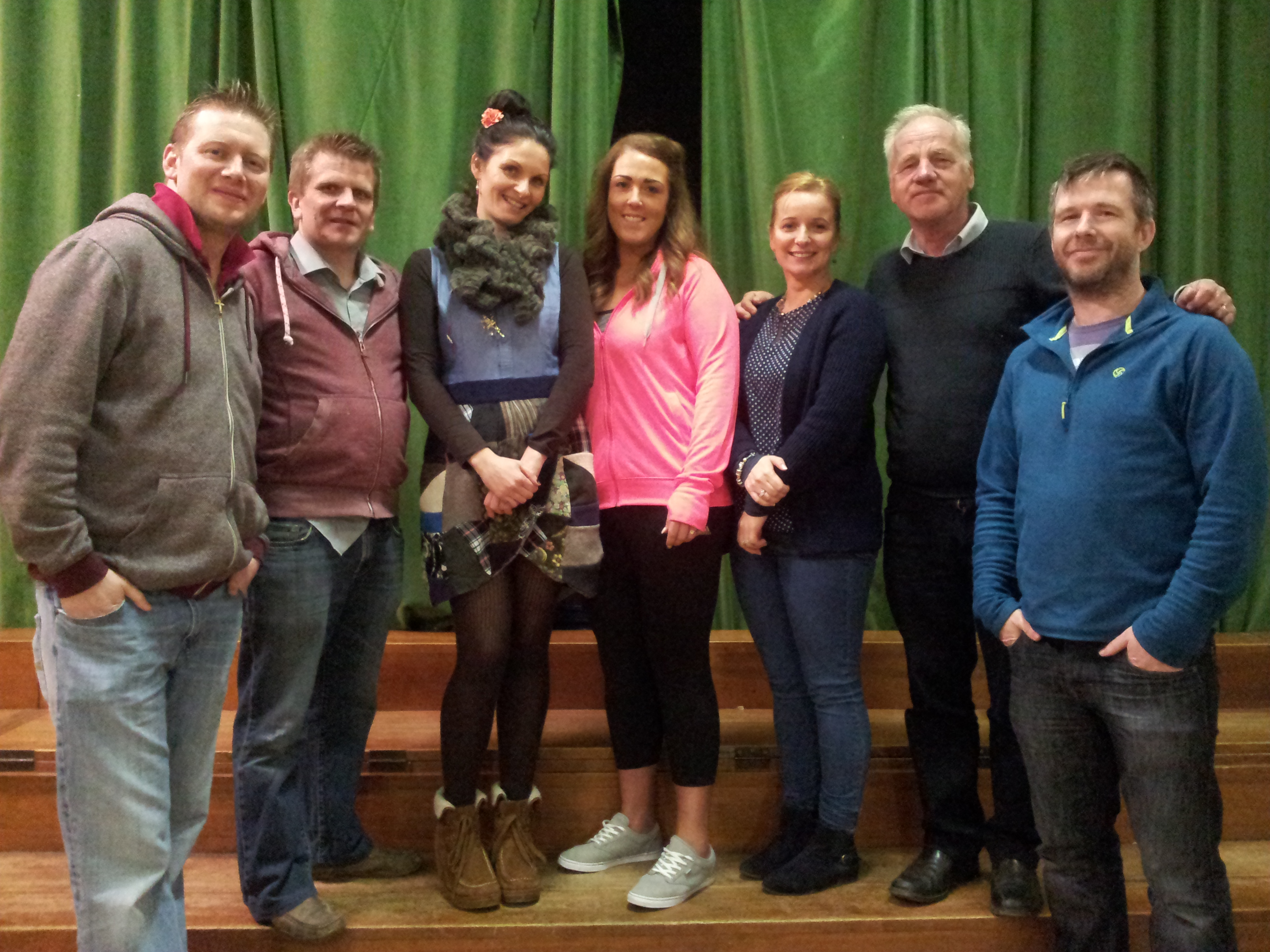 As part of the Co. Wexford Easter Rising Centenary Commemorations programme, Paul was commissioned to write this full-length stage play to be premiered in 2016 by Enniscorthy Drama Group in the newly restored Athenaeum theatre.

The Athenaeum was the headquarters of the Volunteers during the 1916 Easter Rising in Enniscorthy.